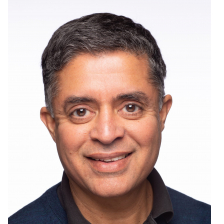 Sanjay Uppal is SVP and General Manager of the Service Provider & Edge Business Unit at VMware, focused on accelerating opportunities with and through Service Providers by driving value for both Service Providers and Enterprise Customers globally, and delivering a multitude of services at the Edge. Sanjay came to VMware following the acquisition of VeloCloud by VMware in December 2017. Prior to VMware, Sanjay was the CEO and co-founder of VeloCloud Networks and grew VeloCloud to be the leader in the fast-growing SD-WAN (Software-Defined Wide Area Networking) space. Earlier, Sanjay ran publicly traded OnMobile Global, serving as its President and COO. Sanjay was at Citrix as VP of the Application Networking business through the acquisition of Caymas Systems where he was President and CEO. In the past, Sanjay has served in executive roles at Webvan (Vice President of Engineering and Business Development) and at Hewlett-Packard where he ran the Internet Infrastructure Division as VP & GM prior to his departure in 1999. He holds an MS in the Management of Technology from Stanford University, an MS in Electrical and Computer Engineering from the University of Wisconsin, Madison, and a BS in Electrical Engineering from The Indian Institute of Technology, Bombay.

You can find Sanjay Uppal speaking on...

Presentation: Edge Computing in the Next Evolution of the Cloud